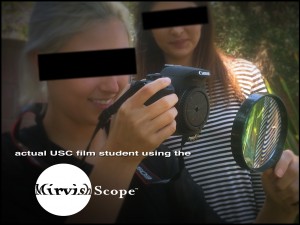 **The Mirvishscope is currently unavailable for purchase. Further updates will be posted here**

Introducing: MIRVISHSCOPE, a two-handed lens system that gives a unique way to add reflections, flares, and distortion to any still or moving image. It offers some of the same creative control as tilt-shift, bokeh or lens whacking systems, but gives a totally original look for the final image, as well as a completely unique user experience for the camera operator or photographer. For as little as $35 (plus shipping), this is also one of the cheapest, most compact lenses available and fits any Canon DSLR (from a C300 to a 7D, and even down to a Rebel!).

When you get the MirvishScope as a reward, we can help you make your next film, while you help us make ours. You can only get one HERE by donating to our Kickstarter campaign for Dan’s new film, Bernard and Huey.

Reviews and press are coming in fast!

Here’s the video that explains it all….

Check out some still photos shot using MirvishScope – scroll down and click on any of the thumbnails!

FAQ:
What’s up with this MirvishScope lens? It looks like you’re just holding a damn magnifying glass in front of the lens.

Well, you’re partially right, but there’s a lot more to it than that. The MirvishScope is a lens system that includes a 4-inch magnifying glass that you hold with your left hand, but also a precision lens mounted into a body-cap with a fixed aperture. We’ll be assembling and hard-mounting the lens into that body-cap so that it’s a dust-proof, light-leak proof system that won’t harm your sensor any more than changing any other lens.

So, what kind of settings do you use on the camera?

Manual is probably best – for both stills and motion pictures. Since it’s a fixed aperture, you’ll need to adjust your exposure with your ISO settings (probably pretty high) and shutter speed.  This ain’t exactly a fast lens, but if you’re an artsy filmmaker or still photographer, you probably like grain anyway.

So I can use this for stills?

Yes!!!  Definitely.  See some of the stills in the gallery below. As more people use it, we’d love to see what you come up with!

Whoa, I think imma hurl just lookin’ at that video. Anyway to steady things out a bit, Tex?

So after this Kickstarter thing, will there be any way to get the MirvishScope

At this point, no. The Kickstarter campaign for Bernard and Huey is the ONLY place to get the MirvishScope and the campaign ends on July 3rd!!!  (if all goes well, we might introduce it as a stand-alone business later this year or next, but don’t count on it – we’re filmmakers first, lens sellers second.)

Hey, aren’t you messing around with a perfectly good cylindrical lens design that Galileo came up with 400 years ago? I studied Galileo. And Mirvish, you’re no Galileo!
Sure, ever since Galileo started messing around with telescopes in 1609, astronomers, photographers and then cinematographers have used cylindrical tubes with internal lenses to looks at stuff. Inside those mysterious tubes, light goes zipping along, bending and bouncing through different lenses and holes, and finds its way to either your eye, a piece of film, or a high-tech image sensor. The optical magic happens behind closed doors, so to speak: All the lens elements are safely ensconced in some sort of cylinder that prevents any distracting outside light from sneaking in. But the result is that now we have incredibly expensive lenses with a multitude of super-sharp glass elements, stabilizers and motorized auto-focus systems. The lenses themselves have become sharper, smarter and pricier than our cameras, and definitely smarter than us. So, when the Galilean Robot Lens Apocolypse comes, don’t say I didn’t warn you.

So why’d you come up with this whole whackadoodle thing anyway?
Go ahead and read this article in Indiewire – I explain the whole backstory in there.